Secret Millionaire Bot claims that it's underground, fully automated piece of software that generates incredible online profits. Approved by some high-profile people such as Mr. Donald Trimps, Paula Yates, Natasha Beddingfield, and Nigel Reo-Cooker... Whether simply taking the mickey or intentionally seeking to pick up dumb-asses, the seller clearly doesn't give a damn about what others think. Today my Secret Millionaire Bot review explains some tricks that used by typical scammers like this one on a sales page.

What Is Secret Millionaire Bot?

Secret Millionaire Bot (SMB) claims that it allows you to bank up to one million dollars per year, using a push-button, fully automated robot. It claims to have a variety of methods and strategies for you to choose from, but it never reveals what they are.

However the seller says what it is not - it's not e-commerce, Bitcoin, MLM or a get-rich-quick scam. Unfortunately, such an unrealistic income claim without a valid explanation ("push-button system" that makes you a millionaire within a year) is exactly what a get-rich-quick scam is.

Secret Millionaire Bot is actually a rehashed version of Easy Insta Profits (easyinstaprofits.com) which no longer exists. As the name suggests, the actual product is a series of how-to video guide on Instagram marketing. There is no fully automated robot, or software, in the members' area.

SMB was initially sold via ClickBank for $37, now it's downsold for as low as $7 via ClickBetter. 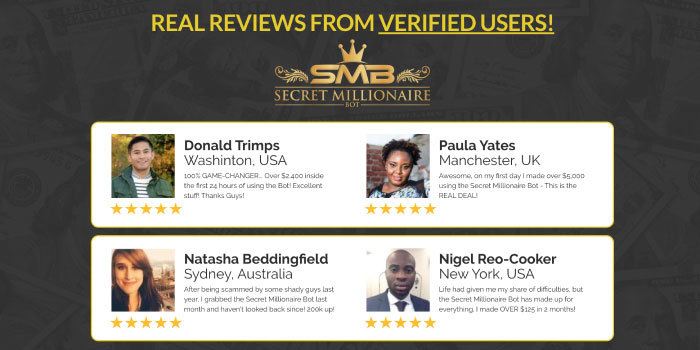 So there is no automated bot or anything automatic in the members' area, but all it has is Instagram marketing how-to videos from YouTube. As I mentioned earlier, the original product was named "Easy Insta Profits", and the members' area refers to itself as it is. This makes clear that whoever purchased Secret Millionaire Bot should be fully entitled to a full refund for "receiving the wrong product".

The area is split across "8 weeks", but each video is 4-10 minutes long, there's no reason why you should be watching them over such a long period.

In fact, the first video is titled "What Is Instagram?", explaining about the giant social network that everyone knows. And that's the first week done, showing how low the quality of the product is. 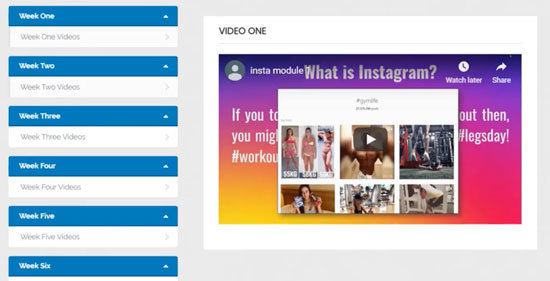 What is says in the FAQ on the sales page is inconsistent. In one part, it promises that you'll get paid from the first day you start using the system, but in another part it says, the current members see their first payday within the first few days.

Of course, neither is a true statement because it's just a set of videos, split across 8 weeks for no reason, and the first video - for the first seven days - merely explains what Instagram is. 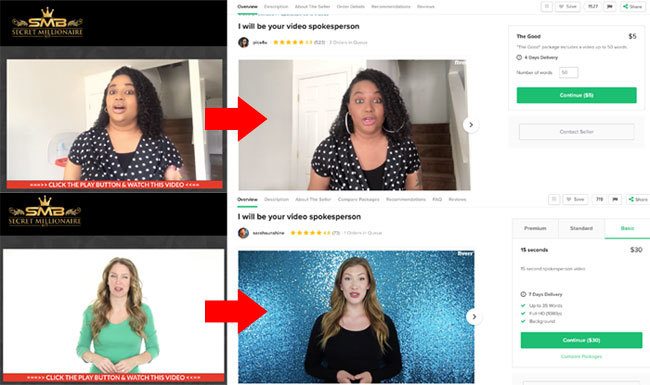 The seller hired a few actors ("video spokespeople") from Fiverr and got them to say they had made a large sum of money with SMB. These people have no shame in making false statements in front of a camera for money. Though technically, they don't have to know that they're actually helping scammers make fake testimonials - they just act according to the script that's provided.

From the display of joke names such as Donald Trimps and Paula Yates, to the actual product being nothing as described, it's obvious that the seller is going incognito.

The "small print" at the bottom of the sales page confirms that the spokesperson used in the video is using a pen name. He calls himself Charles Allen and claims to be the creator and founder of the Secret Millionaire Bot. Effectively the disclaimer in the small print confirms that the entire video content is fictitious.

On the sales video, the seller promises a 60-days money-back guarantee, but on the same page, it says the guarantee period is 30 days. This product is sold via Clickbetter (who sells a lot of scam products) and the Clickbetter's refund policy states, "the products are sold with a 60 Day 'No Questions Asked' Money Back Guarantee." So I suggest that you don't try to contact the seller, which will be a waste of time, but instead claim your money back directly from Clickbetter via your email receipt. See what happens, because Clickbetter support agents can be absolutely helpless at times.

The Disclaimers Deny Everything

If you read the sales page of Secret Millionaire Bot from top to bottom, you'll be able to tell how inconsistent throughout. Especially the disclaimers at the bottom of the page really don't make sense. Firstly they still refer to "easyinstaprofits.com", the former product name, and the seller didn't even bother to change it to "Secret Millionaire Bot".

The Income Disclaimer and Liability Disclaimer both say that the product owner makes absolutely no guarantee that you will make any money.

However it also says, "Testimonials and examples found on this page are results that have been forwarded to us by users of Easy Insta Profits products and related products". As you know by now that the disclosure is not genuine, because the testimonials prove to be falsely made up.

Legal disclaimers should be there to protect sellers from being sued for providing misleading information to consumers. But in this case, the seller is practically lying by saying the testimonials are real, which makes the whole disclosure implausible.

But I find the following disclosure particularly deceptive;

"For all intents and purposes, you agree that our content is to be considered for entertainment purposes only."

In my opinion, the notification should be placed before the "buy now" button, and displayed clearly, so that the viewers can tell the whole product is fictitious before making the decision whether to purchase it or not. With all that said, this product is sold via ClickBetter under "E-business and E-marketing" category, supposedly helps you make money online. For that reason the disclosure is grossly misleading.

As you can see, Secret Millionaire Bot is officially sold "as a joke". Although the actual product is an inferior Instagram marketing video guide, that's never mentioned in the sales page. This means that you'll receive something totally unexpected, and you'll be extremely unlikely to make use of it. Not recommended at all. It's a scam.