I was invited to join SaleChain because "it would only cost $15 or less to start" but was not told what it was for. I had a look at the site and noticed right away that it was just another crypto Ponzi scheme. We really don't know what the future holds and many of us have seriously started to consider various investment options other than cash. But my SaleChain review will explain that this is nothing to do with investment. Sites like this encourage users to earn extra by referring to others, which is wrong, and certainly unauthorized. You really won't want to put your foot in it.

SaleChain claims to be a "chain of international retailers based on the Tron blockchain network to sell blockchain products." But it doesn't actually sell any retail products or services, and the only currency it deals with is Tron. It encourages users to buy its own "SCH" tokens and offers them a multi-level of affiliate commissions for referring others.

Unfortunately, this makes a typical Ponzi scheme, which is considered illegal in many countries.

The site has plenty of guides (links to video and text instructions, FAQ) and appears to be user-friendly at a glance, but the guides don't indicate any relative measurement per current value, and therefore the scale of the benefit is unclear.

What's more suspicious is that it does not provide any information about the syndicate ("chain of international retailers"), the size of the chain, who owns it, not the physical location of the head office.

To invest in SaleChain, you need to download and install "Tronlink" and buy Tron (TRX), which can then be converted to the "SCH" tokens. The minimum investment amount for SaleChain is 500 TRX for 50 SCH, and 500 TRX is valued under US$15 as of October 2020, so it does appear to be easily affordable.

However the investment plan itself is not clear. It says that you will earn a share in the 20% of the total daily token sales. But it also says that your share will be relative to the total number of frozen (parked) tokens against the total number of TRX in the staking fund. The example shows that, if your frozen token is 1,000 SCH and the total number of frozen token is 100,000, your share will be 1% (1,000/100,000), which will then be calculated on the total TRX in the pot. But without knowing how much of TRX is currently pooled by SaleChain, it's hard to work out your current investment value or any foreseeable growths.

SaleChain offers to pay a 10-tiers of referral commissions to the users, a percentage of SCH tokens that each of their direct and indirect referrals purchases.

It's not clear how the commission is paid out; whether it's added in SCH to the user's account or paid out in TRX to the Tronlink wallet. 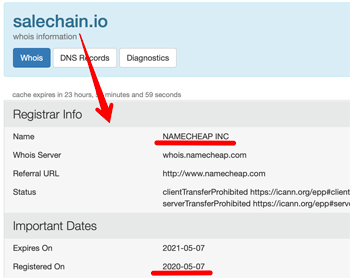 Perhaps the biggest warning sign is the fact that no one knows who the owner is. SaleChain claims to be a chain of "international retailers" but who knows the truth? It can be owned by one individual.

Is It Worth Joining SaleChain?

And because we don't know the owner, we have every reason to avoid - you wouldn't want to invest any money using an unknown platform. In order to maximize the earnings, you'd have to own a bigger share, i.e. hold and freeze as many SCH tokens as you can. But the SCH tokens are only usable within SaleChain and exchangeable to TRX via SaleChain. The site could disappear any time and if it happened, you'd have no way of tracing it.

Likewise, you wouldn't want to recruit others to a scheme that's so intransparent and expect them to build downlines and a multi-level of commissions.

Like any other typical Ponzi scheme, you are likely to lose money for these reasons. If you're interested in investing in Tron currency, you might as well do it directly. I wouldn't try to earn extra by referring others to a third-party platform like SaleChain.

How Does Money Mean To Me?

How Does Money Mean To Me?