I get "join Illuminati" spam comments far too often. There's no way I can approve any of them as they're all insanely long, boring, none of the sentences makes sense, and obviously unrelated to any of our blog article content. Well, I've known about Illuminati for as far as I can remember, and lost interest for as long as I can remember as it's always been so "openly secretive". Even Madonna sang about it, but the lyrics don't tell you any more than what we already know about it.

The original Illuminati was long gone, only existed for a decade in the 18th Century (from 1776 to 1787). Whereas according to BBC, the modern-day Illuminati myths are based on the conspiracy theories born out of the 1960s' counterculture - LSD and the "flower power" hippie movement.

Wherever it originated from, multiple organizations have been claiming to be descended from the Bavarian Illuminati for years & years, promoting political and economical conspiracy theories.

The thing about conspiracy theories though, is that they never give us the answer, do they? They do no more than continuously boggling our minds and never get us anywhere. If you were to join an Illuminati club, which one? And what would be the benefit? Not clear, either. If you're reasonably happy with what you have in life, you don't feel the need to belong to any group that never tells you what you'll get.

So my logic is, that's where Illuminati scammers come in - they take advantage of the ambiguity. They say you'll get rich, famous, and invincible if you join them. They (falsely) declare the objective of the Illuminati.

Of course, their "declaration" is indescribably childish. Without explaining how it works and what you're supposed to do once you join, their claim doesn't make sense or whatsoever. Assuming that these people are copying & pasting the same messages everywhere possible on the internet over and over again, they're insanely lengthy and none of them gets to the point - what the members are supposed to do.

Fame, Wealth and the "Grandmaster"

Illuminati scammers didn't just appear yesterday. I do remember exchanging email messages back in the mid-1990s with someone who claimed to work for the "grandmaster of Illuminati". I did believe him until he said, I'd get paid a million dollars but only if I sent him a $100 administration fee first. The admin fee couldn't be deducted from the money he'd send me because I'd have to prove that I was fully "committed". Committed to what? ...To obey any command given by the Grandmaster. F*ck off, and that was it for me then. Anyway, a quarter of a century later, scammers still use the same cheap trick - if you can even call it a "trick", as all they claim is to secure your fame and wealth simply by giving you a large sum of money with no constructive explanation.

Here are a couple of "invitations to Illuminati" that I've received via Instagram - they're simply trying to draw attention by a very large sum of money to give out, as well as some bold words such as "wealth", "fame", "power" and "protection". One claims to give me $100k and the other one pays a monthly salary of $10k without explaining what kind of job or activities are involved. 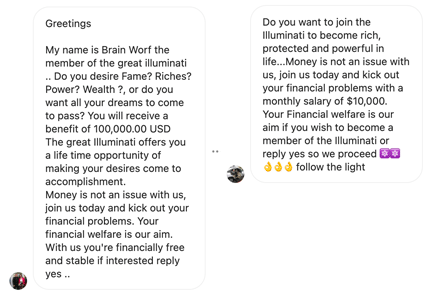 Here's one of the spam comments that have been left on our site and disapproved. It completely lacks imagination, just offers to give you 2 million dollars instantly. It claims that the money will solve all your problems and "achieve dreams"...well, you get the idea by now.

I've recently been approached by an Illuminati "recruiter" through Instagram DM. He was desperate to talk to me on WhatsApp which I declined. Then he asked me for my email address. He had over 100+ posts on Instagram, looked like an ordinary senior person himself, and I image-searched his photos and didn't hit anything (Instagram photos seem to bypass Google image search.) I thought, maybe he's genuinely trying to promote one of the neo-Illuminati groups, I was curious as to find out what they really want, so I gave him one of my disposable free email addresses. Within minutes, he emailed me and our conversation started.

I didn't get to find out how he was scamming because he wasn't selling his story and I just lost patience. So I googled a little bit and found this - Ben Taylor A.K.A. Pleasant Green has challenged an Illuminati scammer from Nigeria (who pretended to be from NY). Ben did it so well and this video explains it all.

And it gets even better - the same scammer came back to Ben, and Ben busted him in the end. Well-done, he's a legend. 😀

So the trick is more or less the same - they say that your membership application is approved and a representative will personally deliver the membership card, and you'll have to pay the delivery fee of $300. Well, I don't know how many people would actually fall victim to an Illuminati scam. But unless your life is so totally screwed up, it seems that you're extremely unlikely to be fooled by such an unsophisticated scamming technique. 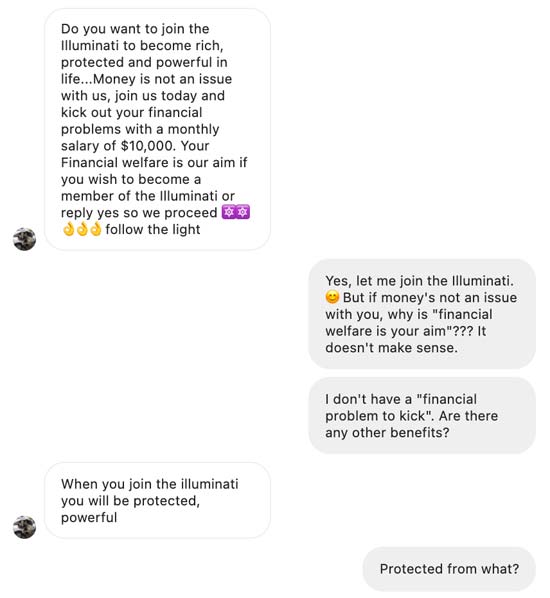 WalletSync Scam Review – Stay Away From This Psycho Scheme

WalletSync Scam Review – Stay Away From This Psycho Scheme