List of Tier 1, Tier 2 and Tier 3 Countries in Digital Marketing

The terms "T1 (Tier 1), T2 and T3 countries" refer to specific sets of geographic locations, and when we run advertising campaigns, these tiers matter significantly.

In other words, Tier 1 countries being the wealthiest, where users are generally most responsive to the campaigns, whereas Tier 3 countries are developing countries with low spending power. 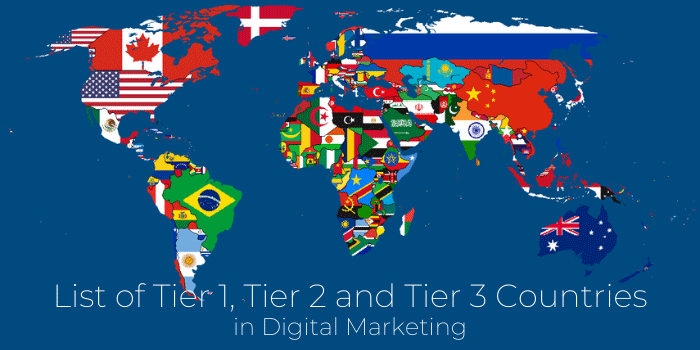 The list of tiers can actually be determined by an advertising agent/network or whoever provides service that involves - there is no rule to it. If they think their target country has a good number of prospects, then it's a T1 country.

Some agents/networks add other wealthy and responsive countries such as;

Whereas bigger, multi-language enabled advertisers who have branches/agents across Europe would consider some Western European and Scandinavian countries as Tier 1, such as;

When "T1 countries" are mentioned by solo ad sellers, affiliate networks and entrepreneurs' community forums, the term is almost always referred to the 5 x English speaking countries mentioned above. Because the websites that we promote are all in English, email swipes are also written in English and the majority of existing buyers are either from USA, CA, UK, AUS or NZ.

For that reason, when you pay a premium rate for "T1 Traffic" to a web traffic provider or advertiser, all the visitors to your landing page will be from these 5 countries.

Apart from the 20 countries that are already mentioned above, less number of prospects but still relatively responsive web traffic is originated from the following countries;

Other countries in the rest of the world are considered "T3". Generally the audience in these countries have low purchasing power, but not always necessarily the case. For example Monaco - it's considered to be the wealthiest country on earth, but it's a French-speaking country with tiny population size. If an English-speaking digital marketer rarely finds customers from Monaco, then it's a Tier 3.

List of Tier 1, Tier 2 and Tier 3 Countries in Digital Marketing

What Is Leased Ad Space? [Review] Just Another Ad Exchange?

What Is Leased Ad Space? [Review] Just Another Ad Exchange?